I Believe in Miracles ~

You know what I love about this quote? She didn't stop at telling us she is a girly girl or that she likes a lot of romance. She went on to say she believes that a new day is coming and on the otherside of the moon is a chance for a miracle. We all should embrace who we are and I know we all want a little...romance...but most of all, we all NEED a miracle. There is something in your life that you have been waiting and hoping for. I'm waiting for answers to some huge issues. I have friends who are waiting for answers and solutions to relationship issues, unfullfilled dreams, and so many other things. The list goes on and on. I want you to have that miracle as bad as I want it for myself. The exciting thing is that God wants to perform one for you and me. My problem is that I forget who is on my side. Assuming responsibility results in me losing focus. I start to think about the mountain in front of me, grab a spoon, and start scooping. Believe me, I work dilegently until I'm exhausted. I work with a passion to solve the issue all the while my actions scream, "I can move the mountain all by myself if I just scoop harder and work faster." After a while the only thing that moves is myself as I collapse. If you don't see me as a pile on the floor you will see me short-tempered and close to tears at the drop of a hat. Do you know what I mean? I forget about the great big God that is anxiously awaiting my surrender to Him so He can perform the miracle and move that mountain.

Today, at church, our pastor said we need to start making appointments with God. We make appointments with everyone else but not God. I know He is the one who can do supernatural miracles and yet I don't go to Him first. Something is wrong with that picture. I'm daydreaming about the miracles which will be present this week if I stop trying to make things happen and instead sit back and reorganize my time. I'm committing to putting things in order. God first, family second, career third, and then everything else.

Thank you God for promising us a miracle.

I believe in colors that paint the sky with hope with each rainbow. I believe in love that stands the test of time. I believe in living as if there is no tomorrow. I believe in never leaving without a kiss and saying I love you. I believe the most beautiful girls I know love God with all their heart and it shines on their face as they endure and stand in faith. I believe in tomorrow. I can't wait to see the miracles! ~ Amber
Posted by Always, Amber at 8:20 PM 1 comment:

Mr. GG is my new friend. He taught me something about myself that I didn't know I needed to learn. Before I tell about what I learned I want to tell you about my new friend. He is magnificent. The most amazing thing about him is that he listened to everything I had to say and with no words showed me areas in myself that I needed to overcome. The more I engaged the more he responded to me as though we had always been friends. Our time together was short. Really we were only able to spend a few hours together and it was one of the best times of my life! Romance is such a funny thing. He romanced me with his never ending strength. It was like he has always been there and will always be. One thing about Mr. GG is he forever changed me and for that I will always love him!

You see, we met for the first time last week. I was in San Francisco visiting for the first time. I heard he could change my life if I was brave enough to introduce myself and pour out my heart to this stranger. As I was approaching him I realized that I might not be welcomed or comfortable interacting with him. He was huge and I felt overwhelmed by his powerful presence. As I moved closer to meeting him, I realized that I really didn't want to be alone on this voyage. I began to question what I was really fearful of and what that meant in my life. Really now, I tried to slap myself with reality. I'm here in public with lots of other people, although strangers, I was not alone. But, I was the only one who had any idea of the sadness and fear that gripped me in an unknown city where I knew no one's name for miles and miles. This is the moment I will forever remember. I began a dialog with Mr. GG and spilled out all my fears.

Being alone was not really a bad thing, it was a fantastic thing. It was what I needed in order to think about all God has been teaching and showing me lately. I realized no matter how big a situation may seem it is only as big as you give it the power to be in your life. This is the first blog I have done in 7 months because I haven't know how to express myself in this devestating season of life. My circumstances have been so big in front of me that they were looming like an unwelcomed friend who just doesn't get the point that I wanted to be alone. Ironically, as much as I have longed for that solace I was scared of what was really inside that I needed to process. Realization rained down, Mr. GG was not my nemesis, I have been. For months, I have allowed my pain to overpower my steps. Crossing the threshold of realization was tough but liberating. The song in Annie, Anything You Can Do, was going through my head and I realized I was Annie and Frank all in one. I can do it better! I can do it bigger! I can do anything better than anything I have ever done before!! Wow, what empowerment when my conversation changed to the acceptance that I wasn't going to be consumed. Circumstances are not going to be bigger and better than me or God's power in me. Sometimes it takes embracing fear, looking past what is obvious, and engaging in the unknown. For me, I had to step out and see that I was in plain site. Hiding behind what might come was destroying me. I ventured into the unknown and during my journey I was enamoured by my new friend who showed me the way.

For that reason, I dedicate this to my forever friend, Mr. Golden Gate Bridge. My enlightenment was amazing. The ride from Fisherman's Wharf to Saucalido was only 8 miles but the truth teller of the journey was in what confidence and strength I gained in the ride! 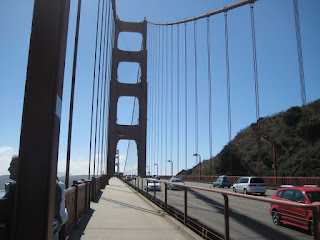 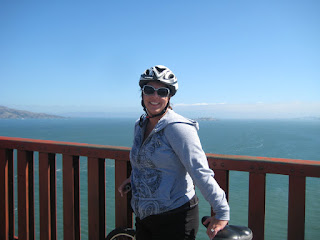 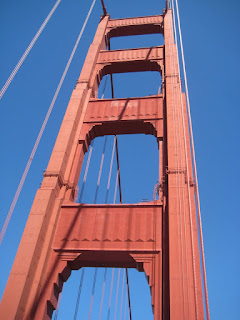 Posted by Always, Amber at 9:55 PM No comments: